What is the EU
Whistleblowing Directive?

On October 7th 2019 the Council of the EU formally adopted a set of principles intended to set a minimum standard of protection for whistleblowers across all EU member states.

At a high-level, member states must;

* This accounts for more than 50,000 organisations within the UK and over 500,000 across the EU. Additionally, the Directive will also require all organisations to ensure that whistleblowers are protected against retaliation irrespective of size.

There is an obligation to create effective and efficient reporting channels in companies of over 50 employees with the intention of positively contributing to the development of a healthy corporate culture.

An increased number of profiles protected

Persons protected include those who could acquire information on breaches in a work-related context such as employees, civil servants at national/local level, volunteers, trainees, non-executive directors and shareholders.

Feedback obligations for authorities and companies

The rules create an obligation to respond and follow-up on whistleblower reports within 3 months (extended to 6 months for certain external channels in certain circumstances).

A wide scope of application

The new rules will cover areas such as public procurement, financial services, prevention of money laundering and public health. For legal certainty, a list of all EU legislative instruments covered is included in an annex to the Directive. That said, Member States may go beyond this list when implementing their new rules.

Additional support and protection for whistleblowers

The rules introduce safeguards to protect whistleblowers from retaliation, such as being suspended from work, demoted or intimidated. Those assisting whistleblowers, such as colleagues and relatives are also protected. The Directive also sets out a list of support measures which must be put in place by member states for whistleblowers.

Adopting the EU Whistleblowing Directive -
will the UK adopt?

Following Brexit, the UK is not required to abide by EU initiatives. The UK was, however, amongst the first nations to adopt whistleblowing legislation in the form of the Public Interest Disclosure Act (PIDA) in 1998. PIDA contains the concept of ‘Prescribed Persons’ which are similar to the EU’s required ‘Competent Authorities’.

There are also early signs that the UK will adopt the Directive in full in order to remain closely aligned to the EU and promote cross-border trade. An All Party Parliamentary Group (APPG) was formed in 2018 to review UK whistleblowing protections. In 2020 the APPG proposed a bill to create ‘the Office of the Whistleblower’, a central Competent Authority to oversee whistleblowing activity in the UK. The Office is also reviewing the use of NDAs in relation to whistleblowing cases despite their lack of legal standing in current UK law.

Additionally, there is another bill making its way through the House of Commons seeking to overhaul PIDA. The most significant changes are to expand the coverage of protection to match the EU Directive and to make ‘failure to investigate matters effectively’ a criminal offence.

What changes are needed to align with the EU Directive 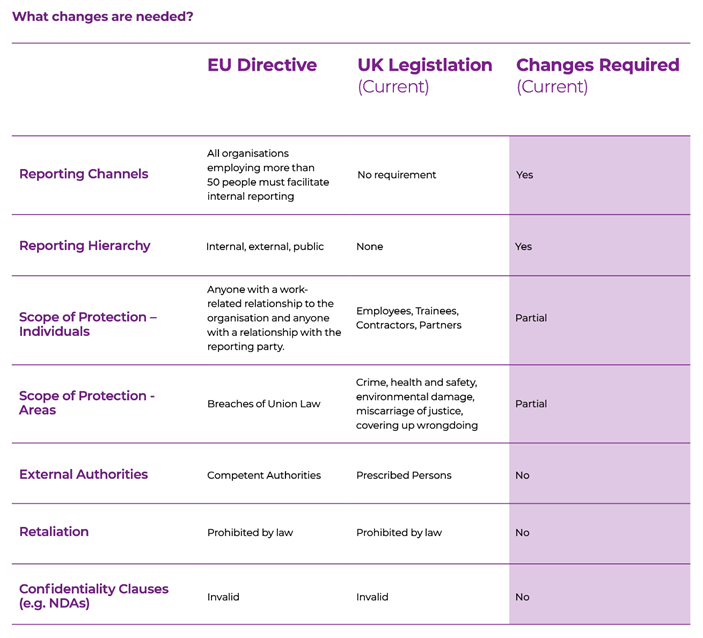 The number of Employment Tribunals in the UK has increased by an average of 15% over the last 5 years, currently running at 1 tribunal each year for every 11 businesses in the UK. If this trend continues there will be one tribunal for every 7 businesses within 3 years. With enhanced protections for whistleblowers, particularly relating to corporate inaction or retaliation, it is likely that this rate will accelerate substantially going forward unless organisations are able to demonstrate clearly that they have at least followed minimum standards, or ideally best practice, relating to the management of whistleblowing cases. 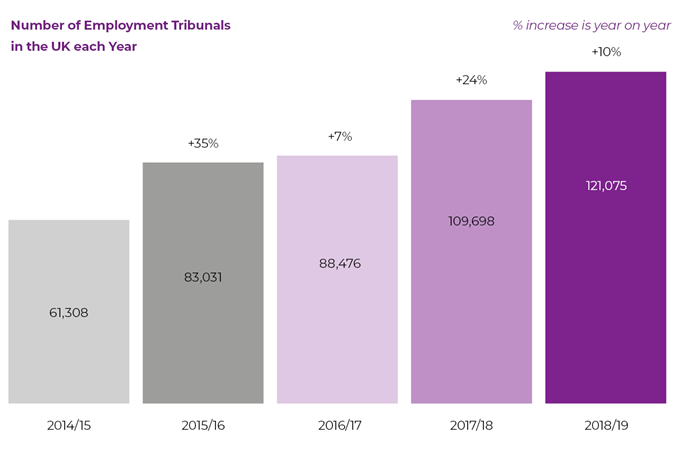 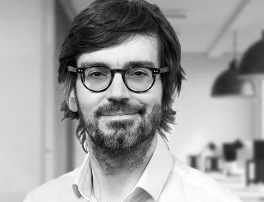 “The EU Whistleblowing Directive marks an important point in the evolution of global Whistleblowing legislation and the continued recognition of the value of effective whistleblowing programmes to individuals, businesses and the economy. Unifying standards will help firms to put effective arrangements in place to prevent, discover and resolve employee misconduct and make workplaces safer, both physically and mentally”. 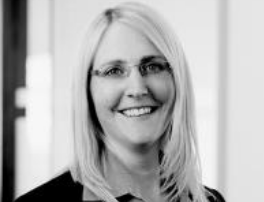 “Good whistleblowing procedures have always been a key internal control mechanism to ensure that wrong behaviours can be raised and addressed. The EU Whistleblowing Directive extends the breadth and depth of the requirements capturing more organisations. For the Directive to really affect behaviour change and support the identification of wrongdoing, organisations need to embrace the changes and put in place the right mechanisms to protect themselves and their workforce”.