The cost of neglecting your whistleblowing arrangements

Whistleblowing and misconduct have been commonly reported as front page news for some time. The long history of modern corporate misconduct is often discussed with reference to the Enron scandal in 2001. Almost 20 years on and corporate scandals continue to make the headlines and damage reputations. The recent Wirecard fraud has cost investors around $22.5bn and has caused many honest employees to lose their jobs.

The financial benefits of effective whistleblowing arrangements are now well understood, so much so that this is a key driver of the EU Directive. All businesses are vulnerable to employee misconduct. The Annual Fraud Indicator (2018) estimated the cost of business fraud in the UK to be £190bn which averages out at over £135,000 per business in the UK. The average cost of fraud varies dramatically when weighted by headcount;

The figures in the table are of course averages and the cost of any one individual incident may be far greater, both in terms of direct cost and reputational damage.

Whistleblowing arrangements alone of course will not eliminate corporate fraud, but with a detection rate of 1 fraud for every 10 organisations* whistleblowing can certainly detect incidents and limit damage. Whistleblowing also covers a wide range of misconduct including activities which carry direct cost, such as fraud or theft, and incidents which incur indirect costs including poor employee morale, high attrition and reputational damage such as bullying and discrimination.
(*Safecall Data 2020) 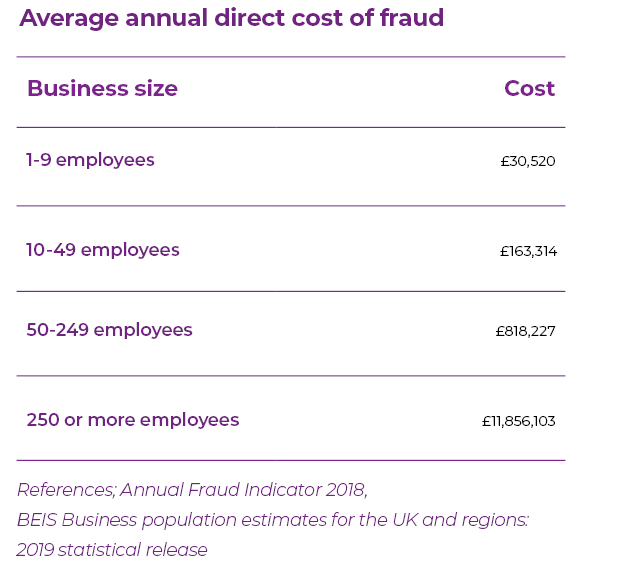 Fraud represents only one element of misconduct, it can be much wider: 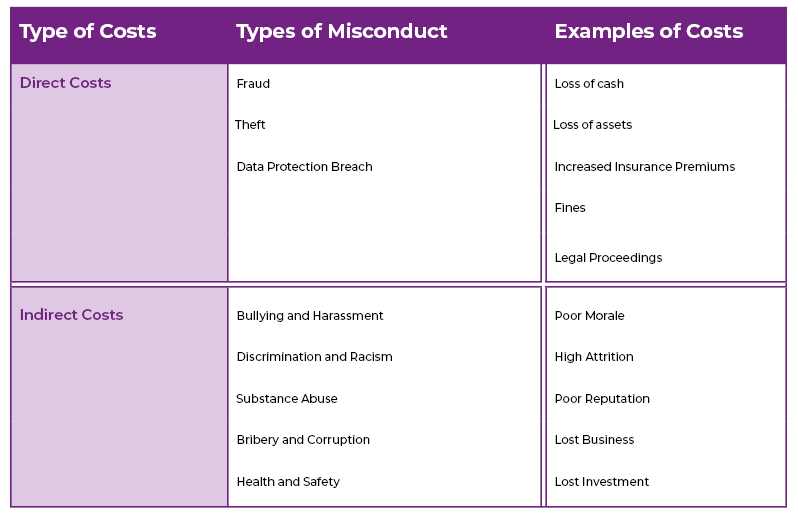 In addition to the direct and indirect financial costs and the mitigatory benefits of effective whistleblowing systems, it is increasingly likely that organisations and responsible individuals will be held accountable for failing to manage concerns effectively.

Hinderance
If an organisation or individual hinders, or attempts to hinder, reporting of concerns.

Confidentiality
If an organisation or individual fails to appropriately safeguard the identity of a whistleblower.

Retaliation
If an organisation or individual takes, or permits, detriment to the whistleblower.

It is also worth noting that the burden of proof will sit with the party accused of retaliatory action to prove that their action was not retaliatory in nature.

Under the Directive, if a reporting person cannot report concerns easily, have their identity protected, have their concern thoroughly investigated and be safeguarded from retaliation, their organisation and senior managers will have a case to answer and may find themselves personally liable before a judge.

The death of the NDA relating to unacceptable behaviour

Non-Disclosure Agreements (‘NDAs’) are commonplace in business. When exiting a senior employee from a business, you are an outlier if you don’t have one signed, regardless of whether they are a good leaver or a bad leaver. With the new rules around whistleblowing coming into force this common practice will be shaken-up.

The basics of a confidentiality clause in a settlement agreement are not usually controversial; they usually contain exceptions which allow the employee to tell their immediate family and professional advisers about the settlement terms (providing that those told maintain the confidential nature) and the employer can disclose details to their HR team, payroll provider and advisers.

An NDA cannot however stop a person from whistleblowing or reporting a crime to the police. In the past there has often been a misconception that it can serve as a gagging order and NDAs have been used for the wrong reasons which can create a culture of distrust in the workplace. Indeed the APPG on whistleblowing found evidence that NDAs are routinely used in whistleblowing cases, finding that employees often lack the resources required to challenge these agreements [1]

The introduction of the EU Whistleblowing Directive will help to enshrine strong whistleblowing procedures in businesses and dispel any doubt that an NDA has the power to silence whistleblowing of unacceptable behaviour.

Many organisations try to bury bad news, but by having a culture which encourages employees to speak up and support one another they can address problems early, avoid legal actions, help to retain a talented workforce (by making employees feel valued and motivated) as well as promote an inclusive workplace culture.

The EU Directive 2019/1937 is the latest in a raft of legislative reform designed to enhance the protections of whistleblowers including SAPIN II in France, Sarbanes Oxley (SOX) in the US and amendments to the Whistleblower Protection Act (2004) in Japan. The UK is also actively reviewing whistleblowing protection legislation. The goal of all of these reforms is to reduce the fear of retaliation by encouraging individuals to report serious incidents to the appropriate people for investigation and remedy. This is a recognition of the value of whistleblowers in fighting workplace misconduct which costs employees, organis ations, suppliers, customers, shareholders and economies billions of pounds each year.

Issues such as fraud, money-laundering, corruption and discrimination make headline news on a daily basis due to the harm they cause to a wide range of people in the name of personal gain. The best chance of remedying these issues is when they are brought to the attention of those with an appropriate mandate and sufficient resources to diagnose and remedy the issue(s).

Organisations are then able to resolve the individual incident and take steps to prevent similar issues reoccurring in the future.

Establishing a minimum standard of whistleblower protections across all EU Member States is a vital step towards supporting people to raise their concerns free from fear of personal detriment and stigmatisation.
Increasingly it will benefit organisations in all geographies, all sectors and of all sizes to ensure that their mechanisms for discovering, investigating and resolving serious misconduct are effective. The costs, both direct and indirect, of failing to resolve these issues looks set to increase substantially over time.